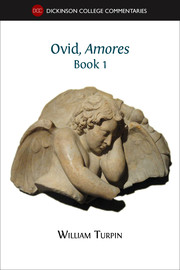 From Catullus to Horace, the tradition of Latin erotic poetry produced works of literature which are still read throughout the world. Ovid’s Amores, written in the first century BC, is arguably the best-known and most popular collection in this tradition. Born in 43 BC, Ovid was educated in Rome in preparation for a career in public services before finding his calling as a poet. He may have begun writing his Amores as early as 25 BC. Although influenced by poets such as Catullus, Ovid demonstrates a much greater awareness of the funny side of love than any of his predecessors. The Amores is a collection of romantic poems centered on the poet’s own complicated love life: he is involved with a woman, Corinna, who is sometimes unobtainable, sometimes compliant, and often difficult and domineering. Whether as a literary trope, or perhaps merely as a human response to the problems of love in the real world, the principal focus of these poems is the poet himself, and his failures, foolishness, and delusions. By the time he was in his forties, Ovid was Rome’s most important living poet; his Metamorphoses, a kaleidoscopic epic poem about love and hatred among the gods and mortals, is one of the most admired and influential books of all time. In AD 8, Ovid was exiled by Augustus to Romania, for reasons that remain obscure. He died there in AD 17. The Amores were originally published in five books, but reissued around 1 AD in their current three-book form. This edition of the first book of the collection contains the complete Latin text of Book 1, along with commentary, notes, full vocabulary and embedded audio files of the original text read aloud. Both entertaining and thought-provoking, this book will provide an invaluable aid to students of Latin and general readers alike.