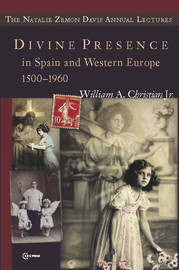 This study addresses the relation of people to divine beings in contemporary and historical communities, as exemplified in three strands. One is a long tradition of visions of mysterious wayfarers in rural Spain who bring otherworldly news and help, including recent examples. Another treats the seeming vivification of religious images—statues, paintings, engravings, and photographs apparently exuding blood, sweat and tears in Spanish homes and churches in the early modern period and the revival of the phenomenon throughout Europe in the twentieth century. Of special interest is the third strand of the book: the transposition of medieval and early modern representations of the relations between humans and the divine into the modern art of photography. Christian presents a pictorial examination of the phenomenon with a large number of religious images, commercial postcards and family photographs from the first half of past century Europe.