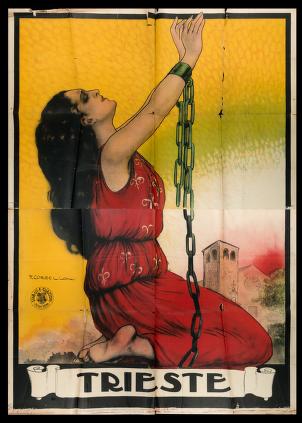 This movie poster is by the Italian artist Tito Corbella (born in Pontremoli in 1885, died in Rome in 1966), who is best known as a designer of postcards of glamorous women. He also produced illustrations and film posters, such as the one presented here. The poster portrays a woman wearing a red dress adorned with white lilies; she is kneeling, her arms upstretched, with chains on her wrists. The woman symbolizes the city of Trieste, historically part of the Austro-Hungarian Empire and, during World War I, its main point of access to the sea. The Italian irredentist movement had been campaigning for the city's annexation since at least the last two decades of the 19th century. At the end of the war, in November 1918, the Royal Italian Army entered Trieste to the applause of the part of the population that favored the Italian cause. The army declared its seizure of the city and established a curfew. Annexation by Italy of Trieste and the surrounding region of Venezia Giulia was politically inevitable, but it was opposed by the newly-established Kingdom of the Serbs, Croats, and Slovenes, which also wanted to annex the city and its hinterland. The status of Trieste as an Italian city was affirmed by the 1920 Treaty of Rapallo. Annexation poisoned relations between the Italian and the Slovene populations, which at times boiled over into armed combat.