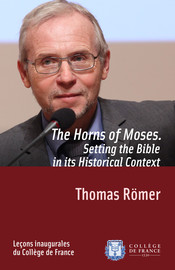 The Horns of Moses. Setting the Bible in its Historical Context

Developments in literary methodologies and archaeology have led scholars to question the traditional conception of biblical chronology and historiography. The starting point for Maximalist studies is the idea that the biblical story should simply be taken as true. However this position is indefensible from a scientific standpoint. Minimalists consider that everything began either during the Achaemenid period, around 400 years before our own era, or even later during the Hellenistic period. They claim that the Bible is a purely ideological construct and that the first known manuscripts date precisely from this era. However the material cultures and traditions underpinning the Hebrew Bible are often older than the Persian era.