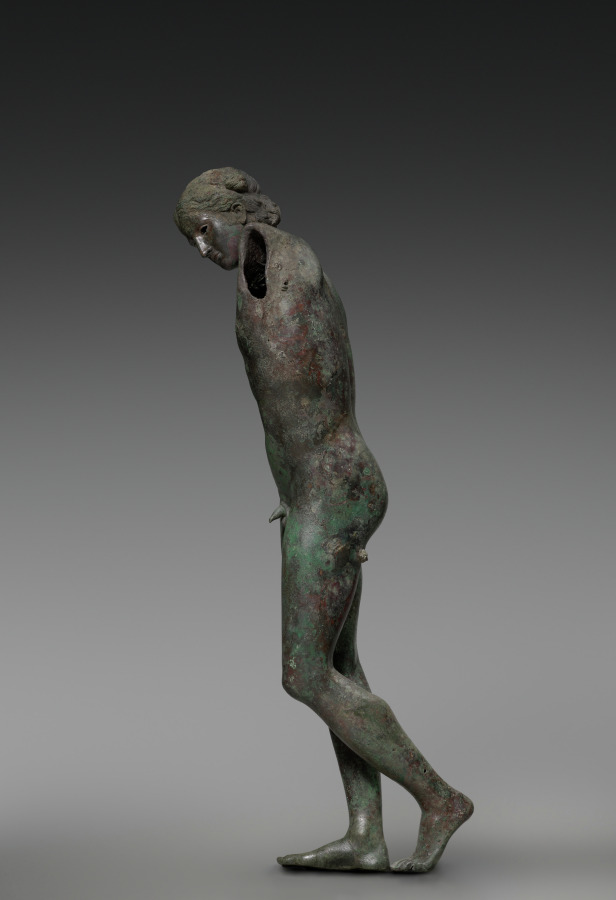 Oggetto: Sculpture
Although Praxiteles was more successful, and therefore more famous for his marble sculptures, he nevertheless also created very beautiful works in bronze. He made a youthful Apollo called the Sauroktonos (Lizard-Slayer), waiting in ambush for a creeping lizard, close at hand, with an arrow. -Pliny the Elder, 1st century ad This statue of the Apollo Sauroktonos may be the one Pliny the Elder saw in the 1st century ad. The complete sculpture most likely showed the young god pulling back a slender laurel tree with his raised left hand, while holding an arrow at waist level with his right, poised to strike the lizard creeping up the tree. Two Roman marble copies preserve the complete composition: one in the Louvre, the other in the Vatican. The museum's sculpture is the only known life-size bronze version of the Apollo Sauroktonos. Technical features such as the way the sculpture was cast and repaired in antiquity, the copper inlays of the lips and nipples, and the stone insert for the right eye (the left is a restoration) are consistent with a date in the 4th century bc. However, technically it may have been possible to produce such a work in the Hellenistic period. The Apollo Sauroktonos is thought to have been created by Praxiteles about 350 bc. Androgynous sensuality and languid, gracefully curved poses are hallmarks of his style. The finest large classical Greek statues were bronzes, but few have survived. If this sculpture is a product of Praxiteles' workshop, it is the only large Greek bronze statue that can be attributed to a Greek sculptor. Praxiteles was widely popular in his day. His famous Aphrodite of Cnidus (late 360s bc) introduced the life-size nude female figure to Western art.
Fonte: Apollo the Python-Slayer, c. 350 BC. Attributed to Praxiteles (Greek, c. 400BC-c. 330BC). Bronze, copper and stone inlay; overall: 150 x 50.3 x 66.8 cm (59 1/16 x 19 13/16 x 26 5/16 in.). The Cleveland Museum of Art, Severance and Greta Millikin Purchase Fund 2004.30.a