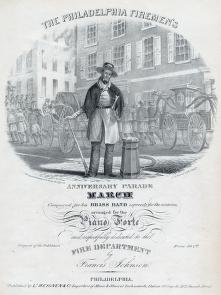 This lithograph from circa 1842 is the cover illustration to the sheet music for ""The Philadelphia Firemen's Anniversary Parade March,"" composed by Francis Johnson for his brass band and dedicated to the Philadelphia Fire Department. The print depicts a uniformed volunteer fireman leaning on his trumpet and standing next to a fire hydrant. The hydrant is connected to a hose carriage in use by firemen fighting a blaze at a building. Another band of firemen pull a hand-pumper past a row of residences and up behind the hose carriage. The volunteer fire companies celebrated the 22nd anniversary of the Philadelphia Fire Department with a parade held on March 27, 1843. The artist of this image was James Fuller Queen (circa 1820--86), a Philadelphia lithographer and pioneer chromolithographer known for his attention to detail and composition, and himself a volunteer fireman. The printer was Peter S. Duval, one of the most prominent lithographers and printers of his day. Born circa 1804 or 1805 in France, Duval emigrated from France to Philadelphia in the fall of 1831 to accept a job as a lithographer with the printing firm of Childs & Inman. By 1837 he had established his lithographic printing shop and he remained in business until his retirement in 1869."