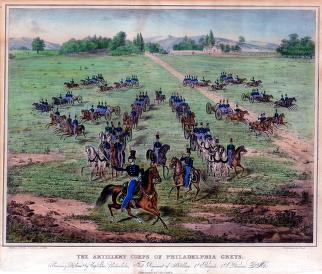 This print, created circa 1845, shows mounted artillery troops of the Pennsylvania militia, known as the ""Philadelphia Greys,"" conducting a drill. The drill takes place on a large field near Powelton in West Philadelphia. In the foreground, Captain George Cadwalader is seated on his steed, commanding the drill and signaling a change of formation with his raised saber. Two officers, one blowing a bugle, trot behind him between two lines of men mounted on horses, seated in horse-drawn carriages, or pulling cannons with teams of horses. Other men on mounts, in carriages, and pulling cannons have broken from the old formation and fan out alongside the lines. The militia men wear blue uniforms comprised of trousers, jackets with epaulets, and tall shakos with plumes. In the background, clusters of trees, hills, and a residence with fenced property are visible. Samuel Powel (1818--85) for whose family the neighborhood depicted here is named, was a member of the Philadelphia Greys. The creator of this lithograph, Alfred M. Hoffy (born circa 1790), was an ex-Major of the British Army; the printer was Peter S. Duval, one of the most prominent lithographers and printers of his day. After Hoffy immigrated to the United States in the mid-1830s, he became the predominate artist of the plates used to illustrate the military fashion periodical, U.S. Military Magazine, published 1839--42 by Duval and lithographer William M. Huddy."