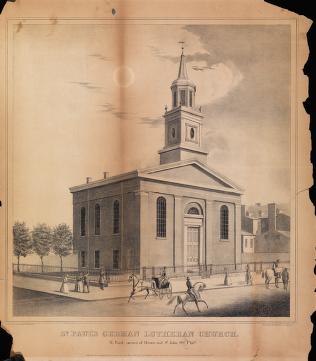 This 1840 lithograph shows an exterior view of a church, identified as Saint Paul's German Lutheran Church, which was built in 1840 after the designs of architect A.D. Caldwell. The church was located on the 200 block of Brown Street in Philadelphia. This view also shows pedestrian and street traffic, including a man and woman admiring the church from a street corner; a couple in a carriage acknowledging a gentleman passing on horseback; and a man seated side-saddle on a stopped horse, conversing with a man in the street. The lithographer of this print was Thomas S. Wagner, who was born in Pennsylvania in 1813 or 1814 and who later became a partner in Wagner & McGuigan, one of the premier and most prolific lithographic establishments of the mid-19th century. In 1840, he was employed by one of the most prominent lithographers and printers of the day, Peter S. Duval, who produced this print. Duval was born circa 1804 or 1805 in France. He emigrated from France to Philadelphia in the fall of 1831 to accept a job as a lithographer with the printing firm of Childs & Inman. By 1837 he had established his lithographic printing shop and he remained in business until his retirement in 1869.