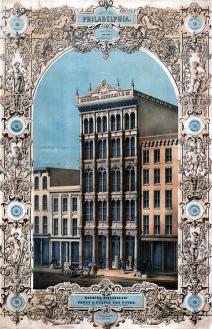 Hoskins, Hieskell and Company. Importers and Jobbers of Fancy and Staple Dry Goods.

This chromolithograph from circa 1854 is an advertisement showing a view of a five-story building located at 213 (i.e., 513) Market Street in Philadelphia. The building was completed in 1853 after the designs of the Philadelphia architectural firm Sloan & Stewart, established in 1853 by architect Samuel Sloan and carpenter John Stewart. The Norman-Italian style ornamented, cast-iron fronted building was tenanted by the dry goods establishment Hoskins, Hieskell & Company. In front of the store, a gentleman departs from the entrance. A couple greets a gentleman standing across from another man who is leaning against a column of the building. Another couple strolls past neighboring buildings on the block, and a group of men convene near crates on the sidewalk. In the street, a driver stands with his loaded horse-drawn dray. The image is surrounded by an ornate border, including filigree; cherubic and female allegorical figures representing the mechanical arts, industry, and virtues; and medallions printed with the names of the contractors who worked on the structure. Contractors listed include: William Keay, Granite; Bottom, Tiffany & Co., Iron Front, Trenton, N.J.; James Spenceley, Plasterer; E.& P. Coleman, Bolts &c. William Butcher & Son, Tin Roofing; George Creely, Brick Layer; Sloan & Stewart, Architects; Brown & Allison, Carpenters & Builders; Wright, Hunter & Company, Plumbing & Gas Fitting; and Hood & Company, Iron Doors & Shutters, Grating &c. Hoskins and Heiskell relocated to the site in 1853. The building was renumbered to 513 Market Street in 1857, following the consolidation of the city. Artists Christian Inger (circa 1814--circa 1895) and Louis (Lewis) Haugg (1827--1903) collaborated to create this print. Both artists were born in Germany, immigrated to the United States, and settled in Philadelphia. Inger worked as a lithographic artist in the city circa 1854--95, and Haugg was active in Philadelphia as a lithographic artist and printer circa 1855--1900. Beginning in the 1850s, Inger worked primarily with the printer of this advertisement, Peter S. Duval. Born circa 1804 or 1805 in France, Duval was one of the most prominent lithographers and printers of his day. He emigrated from France to Philadelphia in the fall of 1831 to accept a job as a lithographer with the printing firm of Childs & Inman. By 1837 he had established his lithographic printing shop and he remained in business until his retirement in 1869.