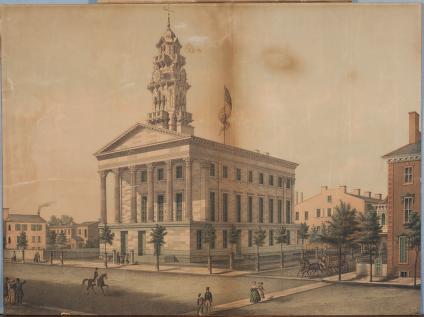 This 1851 chromolithograph shows an exterior view of the hall completed in 1848 after the designs of architect William L. Johnston, and located at Spring Garden and North 13th streets in Philadelphia. The hall contained the office of the mayor and the police station for the district. This view shows the Greek-Revival style building, adorned with an American flag and a steeple built by Jacob Berger. The steeple contained a clock made by T. Tyson. This print also shows pedestrian traffic on the adjacent streets, including strolling couples, a man on horseback, and a horse-drawn street car. Prior to the 1854 consolidation of the city with bordering townships, neighborhoods maintained and housed police stations, mayors, and other government officials in commissioners' halls. This hall at Spring Garden was the largest of the commissioners' halls buildings. This building was razed circa 1892. The artist was Charles Conrad Kuchel, a lithographer who was born in Switzerland in 1820 and worked in Philadelphia from 1840 to circa 1853. The print was produced by Peter S. Duval, one of the most prominent lithographers and printers of his day. Duval was born circa 1804 or 1805 in France. He emigrated from France to Philadelphia in the fall of 1831 to accept a job as a lithographer with the printing firm of Childs & Inman. By 1837 he had established his lithographic printing shop and he remained in business until his retirement in 1869.