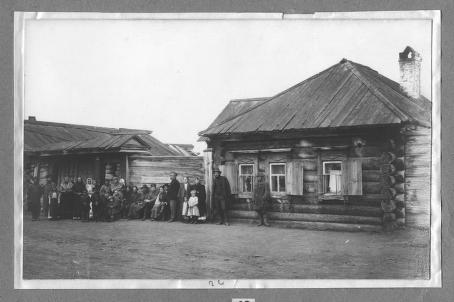 This image is from an album of 167 photographs and 89 drawings made during the 1927 expedition in the Balagansk District of the Irkutsk region by the famous Siberian ethnographer and archaeologist Pavel Khoroshikh and local history specialist Petr Trebukhovskii. The materials in the album detail the different aspects of the economic activities of the Russian and Buriat population, types of houses and farm buildings, tools and daily activities, and various aspects of children's upbringing. Together, these illustrations are the richest source of material for studying the life of the peasant population of the region before the kholkhoz (collective farm) period of the Soviet era; forced collectivization began in 1928. The Balagansk District is located in the south-central part of Irkutsk Oblast, on the left bank of the Angara River. It was settled by Russians from 1655 onward, and has long been inhabited by the Bulagat, a Buriat tribe whose name derives from the Buriat word for sable hunter. The album is held in the Irkutsk Municipal History Museum and was digitized for the Meeting of Frontiers digital library project in the early 2000s.