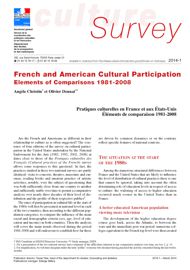 A comparison of the results of these two surveys, which have been published in roughly similar periods since the early 1980s, gives a comparative study of the level of dissemination of cultural practices and their respective public profiles which spans almost three decades. In the early 1980s, the American population, whilst being much more avid consumers of television, had a higher overall level of cultural participation, except in the area of book reading. The profile of cultural consumers in terms of age, sex, level of education and income was fairly similar on both sides of the Atlantic. The changes observed in each country over the course of the following decades are often similar, although they occur later in France (e.g. increasing consumption of television, decreasing book readership, increasing amateur artistic practices). The only main disparity concerns outings to the cinema, theatre and dance performances, for which attendance figures rose in France during the 2000s, at a time when they were showing a marked decline in the USA. Relative changes in the profile of cultural consumers are often similar: we observe an increasingly female and an increasingly older public, whilst reduced participation on the part of the highest-educated has also been seen in both countries, although with a marked disparity between the richest and poorest in the USA which is not seen in France. The French Ministry of Culture and Communication and the US National Endowment of the Arts regularly conduct national surveys (Pratiques culturelles des Français and Public Participation for the Arts) to track changing behaviour in the general population in the fields of culture and media.