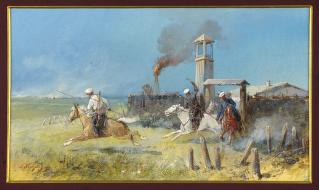 [Painting of a Raised Alarm in the Redoubt of the Fortress].

Presented here is one of 21 watercolors (out of an original 27) from an album relating to the history of the Siberian Cossacks held by the Rare Books Department of the Russian State Library in Moscow. The watercolors are by the artist, ethnographer, and writer Nikolai Nikolaevich Karazin (1842-1908). The album was created as a gift for the future Tsar Nicholas II (1868-1918, reigned 1895-1917), Most August Ataman of All Cossack Voiskos (Commander of all Cossack troops, a title bestowed by Nicholas I), and presented to him in the summer of 1891 on his return to Saint Petersburg through Siberia from a trip to the Russian Far East. Karazin was a long-time resident of Siberia and Central Asia, first as a soldier in the Russian army and then as a chronicler of local events. In the original album, each watercolor was accompanied by a two-page text with a title and a description of the events depicted. In the copy held by the Russian State Library, 11 of the titles and accompanying texts are missing. The theme of the album is Cossack history east of the Ural Mountains, beginning with the victory of the Cossack hetman (or ataman) Ermak Timofeevich (died 1585) over Khan Kuchum in 1582 and continuing with subjects from more than three centuries of Russian history. The official Russian incursion into Siberia dates to September 1581, when Ermak led a detachment of 840 men across the Urals. The following year, in spring 1582 Ermak and his force reached the central regions of the Tatar Khanate of Sibir', where they defeated the ruler of the khanate, Khan Kuchum, and occupied his capital on the Irtysh River. Ermak was working on behalf of the wealthy Stroganov family, which had been granted a charter to land in Siberia by the tsar in 1558 and which sought to extract resources from it for use in its factories. Ermak later died in another battle with Khan Kuchum. The album was digitized at the Russian State Library as part of the Meeting of Frontiers project of 1998-2004, which was funded by the United States Congress, led by the Library of Congress, and involved more than 50 libraries, museums, and other cultural institutions in the United States, Canada, Russia, and Germany. The object of the project was to explore the parallel and intertwined histories of Siberia and the Russian Far East and Alaska and the American West by presenting rare and unique documents from and about these regions.