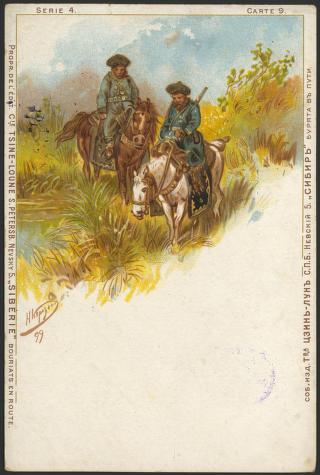 Postcards became popular in the 1890s in response to demand generated by the growth of tourism. In the case of the Compagnie Tsine-Louine (as it styled itself in French) of St. Petersburg, postcards also were used to help market its product, tea. Based on lithographs by the artists Nikolai Nikolaevich Kazarin and Valerii Pavlovich Ovsiannikov, the company's ""Siberia"" series romanticized the shipping routes from China to Russia. The cards portrayed scenes of natural beauty and native life that might have been encountered on the journey from the Chinese border town of Kiakhta east of Lake Baikal to St. Petersburg. This incomplete series of thirty-six cards is one of many postcard collections in the National Library of Russia."