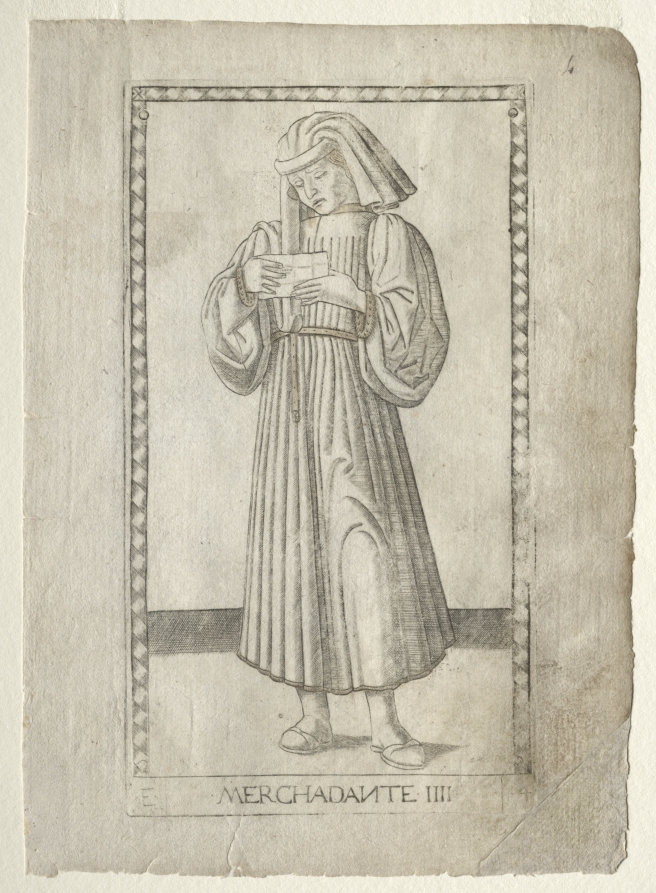 The Merchant (from the Tarocchi, series E: Conditions of Man, #4)

Oggetto: Print
While differing greatly from traditional Tarocchi or tarot cards, this set earned its misleading name because of a few, unimportant similarities. Never a game, scholars generally agree that this set was an educational tool, used to visually describe a fifteenth-century philosophical model of the universe. It was believed that the universe was a ladder-like structure that began with the beggar and rose through the ranks of man, the muses, the liberal arts, the virtues, and the planets, until it finally reached the pinnacle, the dwelling place of God. Reflecting this order, these fifty engravings were divided into five groups of ten: the Conditions of Man; Apollo and the Muses; the Liberal Arts (with three added disciplines--Poetry, Philosophy, and Theology); the Virtues (with three personifications of cosmic principles called "genii"); and the Firmaments of the Universe. Designed, engraved, and hand-colored in gold by anonymous artists and craftsmen, the series exists in two versions. The museum's set, known as the "E" series (named for the letter in the lower left corner of the prints in the first group of ten), is believed to be the original, while the "S" series (the letter "S" was substituted for the "E") is considered to be an inferior copy, made within a decade of the first.
Fonte: The Merchant (from the Tarocchi, series E: Conditions of Man, #4), before 1467. Master of the E-Series Tarocchi (Italian, 15th century). Engraving hand-colored with gold; The Cleveland Museum of Art, Dudley P. Allen Fund 1924.432.4