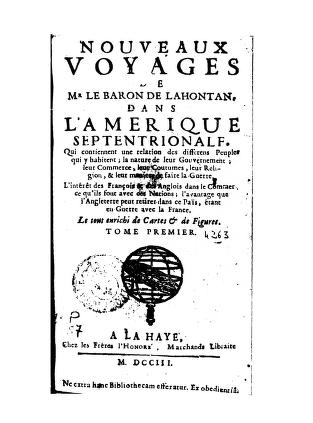 New Voyages to North America by the Baron de Lahontan.

Louis-Armand de Lom d'Arce, baron de Lahontan (1666-1716), was a French soldier who was sent to North America in 1683. He participated in the French campaign against the Iroquois on Lake Ontario in 1684 and was put in command of Fort Saint-Joseph (present-day Niles, Michigan) in 1687. In 1688-89 he explored along the Fox and Wisconsin Rivers and the region around present-day Green Bay, Wisconsin. He returned to France in 1692, but fled to Portugal the following year in a dispute with Jacques-François de Monbeton de Brouillan, governor of Placentia (Plaisance) and of Acadia, who had accused him of insubordination. Lahontan spent the rest of his life wandering around Europe. In 1703 he published Nouveaux voyages de Mr. le Baron de Lahontan dans l'Amérique septentrionale (New voyages to North America by the Baron de Lahontan), a two-volume work that is considered the best 17th-century book on New France. Volume one is written in the form of 25 letters that contain descriptions of places Lahontan visited and accounts of his travels. Volume two contains a sequel to the first volume, Mémoires de l'Amérique septentrionale, which is a detailed description of the geography, commerce, and people of North America. The book includes illustrations and a map. It concludes with Petit dictionnaire de la langue des sauvages (Small dictionary of the language of the Indians), which is mainly a glossary of Algonquin words and their French equivalents, with a small number of Huron words as well. Lahontan's book was widely read, pirated, and translated in Europe, and influenced how such 18th-century thinkers as Voltaire, Montesquieu, and Jonathan Swift thought about non-European peoples.