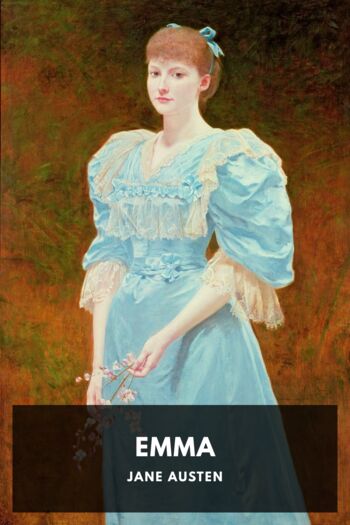 Emma is one of Jane Austen’s best-loved novels. Its eponymous heroine, Emma Woodhouse, is described in the very first paragraph as “handsome, clever, and rich … and had lived nearly twenty-one years in the world with very little to distress or vex her.” In other words, she has lived a pampered, protected life and consequently is somewhat unrealistic in her regard for herself and her own abilities. She befriends Harriet Smith, a young woman of dubious parentage and no money and determines to improve her prospects. As part of this project, Emma decides to become a matchmaker between Harriet and the Reverend Mr. Elton, a vicar in the nearby town. Things, however, do not go as smoothly as she had imagined. The novel provides an insight into the distinctions in the rigid class structure of England in the Regency period, and the social barriers to marriage between persons considered to be of superior and inferior rank. Emma was published in 1815, the last of Austen’s novels to be published while she still lived. It received a generally very positive reception, and was well reviewed (though anonymously) by Sir Walter Scott. Criticisms of the novel, such as they were, centered around its supposed lack of plot, though its treatment of character was recognized and applauded. Today it is regarded as one of Austen’s best works. The novel has been adapted many times for theater, movies and television.