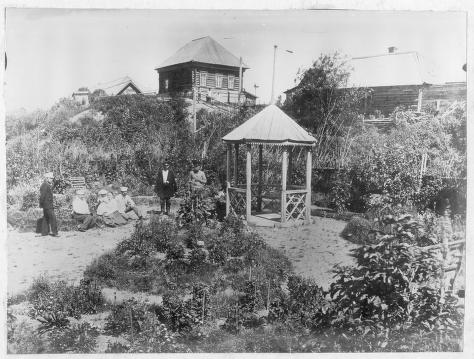 This photograph is from a collection consisting of an album and individual photographs preserved in the Aleksandrovsk Municipal History and Literature Museum ""A.P. Chekhov and Sakhalin"" in Alekandrovsk-Sakhalinskiy, Sakhalin Island (off Russia's southeast coast). The photographs were taken on Sakhalin Island during the late 19th and early 20th centuries and provide rare glimpses of the island's settlements, prisons, and inhabitants. Sakhalin Island was used by imperial Russia as a penal colony and place of exile for criminals and political prisoners. Between 1869 and 1906, more than 30,000 inmates and exiles endured the difficult conditions of the forced-labor colony on the island. Most of the photographs in the collection were taken by Sakhalin artist Ivan Nikolaevich Krasnov, although some are unattributed. The collection depicts public life and institutions in the town of Aleksandrovsk Post, convicts working under harsh conditions or in chains, and political prisoners. The photographs also show the daily life both of the Nivkh people, indigenous to the northern part of the island, and the Russian settler population. The predecessor of the Aleksandrovsk Municipal History and Literature Museum ""A.P. Chekhov and Sakhalin"" appears in the album's photographs. The museum's name refers to a trip taken to Sakhalin Island by the Russian writer and medical doctor Anton Chekhov in 1890, during which Chekhov researched the plight of island's prisoners and native populations. The publication of his Sakhalin Island in 1895 highlighted the depravity of the situation in this remote corner of Russia and led to public protests that helped bring about the closure of the penal colony. The collection was digitized for the Meeting of Frontiers digital library project in the early 2000s."