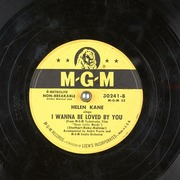 I Wanna Be Loved By You

"Performer: Helen Kane; Andre Previn; MGM Studio Orchestra Writer: Stothart; Ruby; Kalmar From MGM Technicolor Film ""Three Little Words"". Digitized at 78 revolutions per minute. Four stylii were used to transfer this record. They are 2.0mm truncated conical, 2.3mm truncated conical, 2.8mm truncated conical, 3.3mm truncated conical. These were recorded flat and then also equalized with Turnover: 400.0, Rolloff: -12.0. The preferred versions suggested by an audio engineer at George Blood, L.P. have been copied to have the more friendly filenames. Matrix number: 30241B Catalog number: 30241-B Other IDs from the record include: MGM 53 The recording on the other side of this disc: My Sunny Tennessee, So Long! Oo-Long (How Long You Gonna Be Gone?) Three Little Words ."