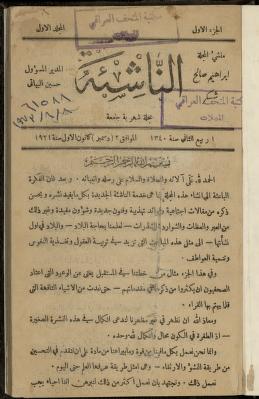 An-Nashi'a (The new generation) was a comprehensive monthly literary magazine dedicated to the advancement of scientific and cultural life in post-World War I Iraq. After the defeat of the Ottoman Empire in that war, Iraq was placed under a League of Nations mandate administered by the British. In 1921, a monarchy was established, and the country went on to gain independence from Britain in 1932. An-Nashi'a was founded at the beginning of the monarchy, and its first editorial declared that the new publication was a response to the needs of the new nation. Only three issues (called parts) appeared before An-Nashi'a ceased publication. The magazine was owned by Ibrahim Salih; its editor-in-chief was Hassan al-Bayati. Each issue started with long essays on a wide range of issues covering literature, science, arts, philosophy, history, new discoveries, lifestyle, and other news and anecdotes from around the world, especially from America. Examples of topics covered included the value of learning; sea life, minerals, and other resources; poets and poems; lessons from history, which cited Alexander the Great and Julius Caesar; sports, and particularly how American newspapers dedicated many pages on a daily basis to news about sports; the ""don'ts"" of social etiquette; and ""immortal words,"" a collection of wisdom attributed to figures from around the world, including George Washington. Overall, the magazine had a progressive and worldly air, although it remained anchored in Arabic culture. The last page was typically ""from management"" and was dedicated to correcting typographical errors, with apologies to the readers. In addition to the owner and the editor-in-chief, contributing writers included some of the leading pan-Arab intellectuals at that time, such as Iraqi Kurdish poet and philosopher Jami?l S?idqi? Zaha?wi?, Egyptian writer and essayist Mus?t?afa? Lut?fi? Manfalu?t?i?, Turkish-Egyptian poet Waliy ud-Deen Yakun, and Lebanese-American writer, artist, and author of The Prophet, Khalil Gibran."