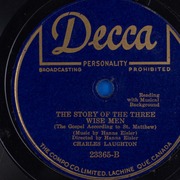 The Story of The Three Wise Men (The Gospel According to St. Matthew)