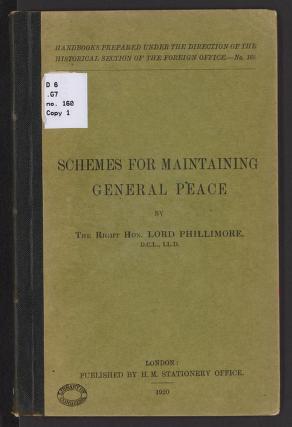 In preparation for the peace conference that was expected to follow World War I, in the spring of 1917 the British Foreign Office established a special section responsible for preparing background information for use by British delegates to the conference. Schemes for Maintaining General Peace is Number 160 in a series of more than 160 studies produced by the section, most of which were published after the conclusion of the 1919 Paris Peace Conference. Written by Lord Phillimore (Walter George Frank Phillimore, 1845-1929), a prominent British judge and expert on international law, the book is one of the few volumes in the series published under the name of an individual author. The study is in four sections, in which Phillimore discusses the different schemes for maintaining general peace proposed over the centuries. The first, ""One Supreme Power,"" analyses the views of Dante and Leibnitz on pope or emperor as a force for peace. The second section, ""A Federation of States,"" discusses proposals made by King Henry IV of France, the Abbé de Saint-Pierre, William Penn, Immanuel Kant, and others to secure peace through federation. The third, ""International Arbitration,"" covers the possible roles of mediation and arbitration in securing peace, including the Hague conferences of 1899 and 1907, the 1914 Treaty of Washington between the United States and Great Britain, and the attempt in 1917 by Pope Benedict XV to mediate a settlement to World War I. The final section, ""Recent Schemes of Federation,"" discusses proposals offered during the war, some of which influenced the deliberations leading to the establishment of the League of Nations under the Treaty of Versailles. Phillimore notes that most of these recent schemes are ""composites"" of the second and third varieties, containing elements of both federation and international arbitration."