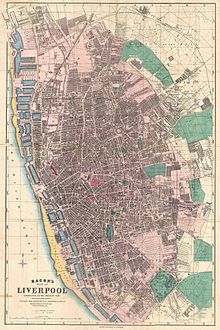 Bacon's Map of Liverpool Corrected to the Present Time.

This is Bacon's scarce c. 1890 travellers pocket map of Liverpool, England. Cartographically Bacon derived this map from the Ordinance Survey with embellishments including quarter mile grid and square segmentation, beautiful hand tinting, and a focus on the identification of docks, rail stations, churches, municipal buildings, parks, and other important buildings. Notes all streets and city wards. Parks are highlighted in green, pocks in blue, sandbars in yellow, and transportation hubs in red. Published form C. W. Bacon's office at 127 Strand Street, London. This map was originally purchased in by A. H. Green in Liverpool bookseller and stationer H. B. Saunders. Though most maps are without substantial provenance, this map is known to have been originally purchased for the European tour of the prominent 19th century New Yorker Andrew Haswell Green (1820 - November 13, 1903). A. H. Green was a New York lawyer, city planner, civic leader and agitator for reform. Called by some historians a hundred years later the 19th century Robert Moses, he held several offices and played important roles in many New York projects, including the development of Riverside Drive, Morningside Park, Fort Washington Park, and Central Park. His last great project was the consolidation of the Imperial City or City of Greater New York from the earlier cities of New York, Brooklyn and Long Island City, and still largely rural parts of Westchester, Richmond and Queens Counties. In 1903 Green was murdered in a case of mistaken identity. He is buried in Worcester. In 1905 his family estate in Worchester was turned into a public park. Green's personal effects and other belongings were stored for over 100 years until recently being rediscovered and offed for sale.