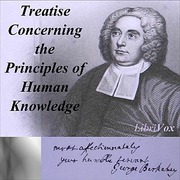 A Treatise Concerning the Principles of Human Knowledge (Commonly called Treatise when referring to Berkeley's works) is a 1710 work by the Irish Empiricist philosopher George Berkeley. This book largely seeks to refute the claims made by his contemporary John Locke about the nature of human perception. Whilst, like all the Empiricist philosophers, both Locke and Berkeley agreed that there was an outside world, and it was this world which caused the ideas one has within one's mind, Berkeley sought to prove that the outside world was also composed solely of ideas. Berkeley did this by suggesting that Ideas can only resemble Ideas - the mental ideas that we possessed could only resemble other ideas (not physical objects) and thus the external world consisted not of physical form, but rather of ideas. This world was given logic and regularity by some other force, which Berkeley concluded was God.Part 2 of the Treatise was never written. (Wikipedia)