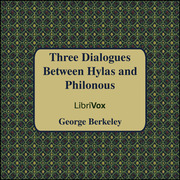 Three Dialogues between Hylas and Philonous

Berkeley uses Hylas as his primary contemporary philosophical adversary, John Locke. A Hylas is featured in Greek mythology and the name Hylas is derived from an ancient Greek word for matter which Hylas argues for in the dialogues. Philonous translates as lover of mind. In The First Dialogue, Hylas expresses his disdain for skepticism, adding that he has heard Philonous to have maintained the most extravagant opinion... namely, that there is no such thing as material substance in the world. Philonous argues that it is actually Hylas who is the skeptic and that he can prove it. Thus, a philosophical battle of wit begins. - (Summary from Wikipedia)