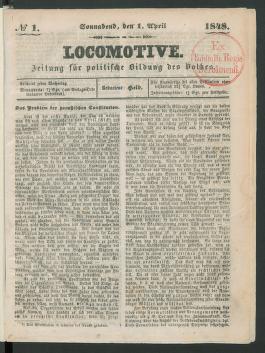 Locomotive: Newspaper for the Political Education of the People.

The radical 1848 newspaper Locomotive is the most important journalistic work of Friedrich Wilhelm Alexander Held (1813--72). After pursuing a military career as an officer in the Prussian army, Held returned to civilian life and worked for a time as an actor and writer. In 1843, he moved to Leipzig where he published the newspaper, Die Lokomotive (The locomotive). The paper quickly achieved success, its circulation reaching some 12,000 copies per day. His paper was soon banned, even though Held was less a political radical than an advocate for constitutional monarchy. After several attempts to continue publishing in Leipzig, Held moved to Berlin where, on April 1, 1848, he began publishing Locomotive: Zeitung fu?r politische Bildung des Volkes (Locomotive: newspaper for the political education of the people). The year 1848 was one of revolutionary upheaval in much of Europe, caused by rising food prices and economic and political unrest, which led to the overthrow of King Louis Philippe in France in February. In Germany, delegates met in Frankfurt to call for political reforms and the creation of a unified, democratic Germany. The popular uprisings eventually collapsed or were suppressed by Prussian or Austrian troops. Publication of Locomotive was banned in January 1849. The 201 issues of the newspaper shown here, spanning the April--December 1848 period, are a direct witness to the revolutionary events of 1848.