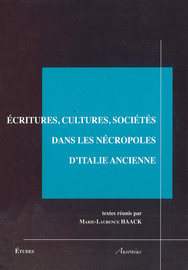 Starting from the principle that most of the inscribed elements of the contents and the physical structure of tombs provide information of some kind, whatever their original function, the participants at this conference organized by the researchers of the team « épigraphie et nécropoles » of the UMR 8546 of the CNRS have attempted to arrive at conclusions in relation to the social, political and religious aspects of the material evidence. Study of necropolises has one main advantage over the study of settlements : the tomb is a fixed structure, generally closed, where everything is placed inside and destined to remain there forever. It is thus possible to try to analyze the system of representation that organizes the world of the dead. Instead of being fixed, this system has a dynamic which provides it with its own movements and trajectories.