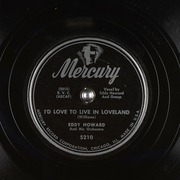 I'd Love to Live in Loveland

Eddy Howard and his Orchestra ; Williams