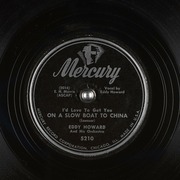 I'd Love To Get You On a Slow Boat to China

Eddy Howard and his Orchestra ; Loesser