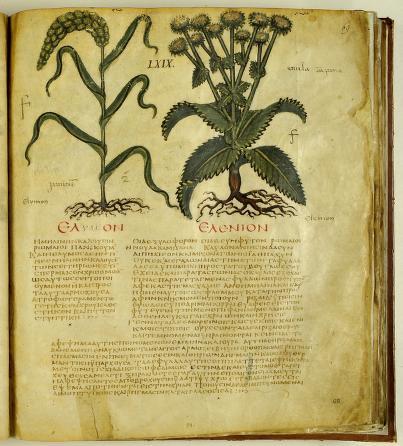 The precious codex known as the Dioscurides Neapolitanus contains the work of Pedanius Dioscorides, the Greek physician who was born at Anazarbus near Tarsus in Cilicia (present-day Turkey) and lived in the first century AD during the reign of the Emperor Nero. Dioscorides wrote the treatise Perì üles iatrichès, commonly known in Latin as De materia medica (Of medical substances), in five books. It is considered the most important medical manual and pharmacopeia of ancient Greece and Rome and was highly regarded in the Middle Ages in both the Western and Arab worlds. The work covers the therapeutic effectiveness of natural substances originating in the animal, vegetable, and mineral kingdoms. The codex at the National Library of Naples includes only the herbal, which, in its 170 illustrated pages, covers all the known medicinal plants with a commentary that describes each plant, its habitat, and its therapeutic uses. The Dioscurides Neapolitanus is strongly associated with the Dioscurides Costantinopolitanus in Vienna, which was produced in Constantinople in 512 for Princess Anicia Giuliana, the daughter of the Western Roman Emperor Olybrius; both works probably derive from a common archetype. However, the Neapolitan codex does not contain the same anthropomorphic and zoomorphic figures that appear in the Viennese codex and in other Dioscorides codices, such as those held in Paris and at the Palazzo Chigi in Rome. The liveliness of the illustrations, rendered more precious by such detailed commentary, contributes to the antiquarian value of this extremely rare manuscript. The work is also a fundamental source for the study of Greco-Roman medical culture and its reception in the Italian Byzantine world around the end of the sixth and beginning of the seventh centuries. It provides evidence of the intellectual and cultural trends of that era, including a certain preference for a didactic type of text that resembles more a manual than a scientific treatise. As already hypothesized at the end of the 17th century by Bernard de Montfaucon, when he saw the Dioscurides Neapolitanus in Naples and praised it for its beauty, the manuscript is undoubtedly of Italian origin, although exactly where in Italy it was made is unclear. Some scholars trace it to the Exarchate of Ravenna, while others argue it is from the south, in a milieu influenced by the Roman statesman and writer Cassiodorus (circa 487--circa 580).