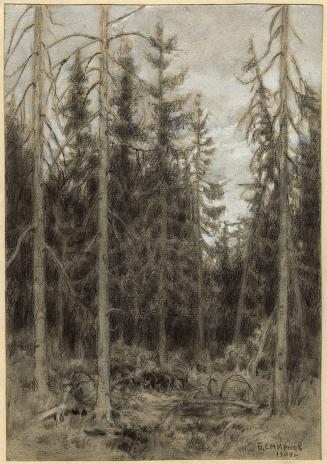 Boris Vasilievich Smirnov (1881-1954) was a Russian artist who in 1904 traveled by prisoner transport from western Russia across Siberia. Along the way he created a series of drawings and watercolors of the people and places he encountered. Best known as a portraitist, Smirnov focused on the faces of the men and women he met, who included exiles, prisoners, settlers from Ukraine and western Russia, local military and civilian officials, peasants and merchants. His works from this period also include a handful of drawings of houses and landscapes. The sketches were made in the Ural Mountains, Irkutsk, Omsk, Krasnoyarsk, and in villages along the route. The details of Smirnov's journey are sketchy. Some accounts say that he traveled along the Great Siberian Road as a volunteer on the way to the front in the Russo-Japanese War. Other accounts say that he was an exile, possibly sent to Siberia for refusing to be conscripted into the army. The Great Siberian Road, depicted in several of Smirnov's drawings, was the route from Moscow to China via Siberia. Smirnov's collection of 99 graphic items is preserved in the Novosibirsk State Museum of Regional History and Folklife. The collection was acquired by the museum from the artist in 1950. It was digitized for the Meeting of Frontiers project in the early 2000s. The complete collection is presented in the World Digital Library.