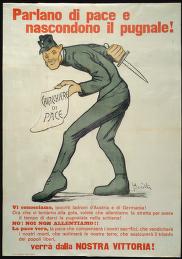 They Talk About Peace but Hide the Dagger!.

This war poster, produced in Verona, northern Italy, in 1918, was aimed at countering the defeatism and war weariness that had taken hold in the Italian population late in World War I. It portrays a sinister-looking enemy soldier who hides a knife behind his back while holding a sign with the words ""rumors of peace."" The caption below proclaims: ""We know you Austrian and German hypocrites and thieves! Now that we have you by the throat, you want us to loosen our grip so that you will be able to stab us in the back! No! We will not ease up! True peace, peace that will compensate us for our sacrifices, that will vindicate our dead, that will redeem our land, that will assure the triumph of free peoples, will come from our victory!"" The message reflects a common theme in Italian propaganda late in the war: that victory was in reach and that talk of peace was disloyal. Such messages were aimed at soldiers at the front, but also at workers, particularly in war industries. By an artist named ""Borilli"" about whom nothing is known, the poster was published by the firm Mondadori, founded by Arnoldo Mondadori in Ostiglia in 1907. Mondadori was active in World War I, notably by publishing magazines such as La Tradotta and La Ghirba for Italian troops at the front."