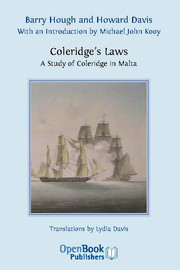 Samuel Taylor Coleridge is best known as a great poet and literary theorist, but for one, quite short, period of his life he held real political power – acting as Public Secretary to the British Civil Commissioner in Malta in 1805. This was a formative experience for Coleridge which he later identified as being one of the most instructive in his entire life. In this volume Barry Hough and Howard Davis show how Coleridge’s actions whilst in a position of power differ markedly from the idealism he had advocated before taking office – shedding new light on Coleridge’s sense of political and legal morality.