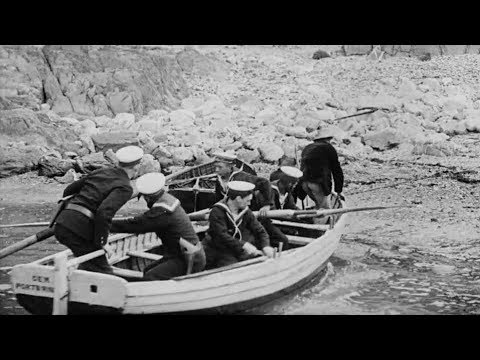 Fa parte degli Orphan Works del British Film Institute
Durata: 12 min.
Oversized characters populate this drama about a jealous fisherman who kidnaps a local girl when she falls in love with a travelling artist. A lifeboat team - arguably the real heroes of the hour - is corralled in attempt to make the rescue. B&C| the London-based producers of the picture| were well-regarded at the time for both feature films and documentary-style items. If this all looks a little melodramatic at times| it's worth considering that the stars of silent dramas would often have to compensate for a lack of sound with exaggerative acting - as perfectly evidenced by the mad histrionics of the jealous fisherman. They were also likely to have come from backgrounds in the theatre| which is now viewed as an altogether different acting platform. This video is part of the Orphan Works collection. When the rights-holder for a film cannot be found| that film is classified as an Orphan Work. Find out more about Orphan Works: http://ec.europa.eu/internal_market/c.... This is in line with the EU Orphan Works Directive of 2012. The results of our search for the rights holder of this film can be found in the EU Orphan Works Database: https://euipo.europa.eu/ohimportal/en... Subscribe: http://bit.ly/subscribetotheBFI.