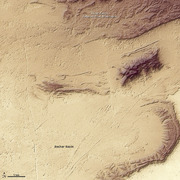 Topography Of Western Algeria: Image Of The Day

The margin of northwestern Africa is outlined by the rugged topography of the Atlas Mountains. Inland from the coastal nation Morocco, the southwest-northeast ridges of the Atlas became more widely spaced. Along the border with Algeria (the area shown here), wide basins interrupt the ridges; these basins are repositories of sediments that have accumulated over millions of years into rock layers that are thousands of meters deep. Farther to the southeast, mountain ridges give way to softer topography -- the sand dune crests that stretch across Algeria's Grand Erg Occidental (Great Western Desert). This image shows the topography of northwestern Algeria based on data from the Advanced Spaceborne Thermal Emission and Reflection Radiometer asterweb.jpl.nasa.gov, (ASTER) on NASA's terra.nasa.gov Terra satellite on October 25, 2005. The Ksour Range (a sub-range of the Saharan Atlas Mountains) that occupies the top part of the scene is the southernmost limit of the Saharan Atlas Mountains; beyond these peaks to the south sprawls the Sahara Desert. Low elevations are yellow, while high elevations are dark brown. In several places, long, unbroken ridge lines drop off sharply into wide basins. Much of the topography here resulted from folding and cracking of the Earth's crust during collisions of Africa with Europe, followed by millions of years of erosion. The mountains and rocky outcroppings funnel scarce rainfall into the basins, which harbor wadis (seasonal rivers) and oases. At lower right, the lowest elevation in the scene, the basin is earthobservatory.nasa.gov/Newsroom/NewImages/images.php3?img_id=17730 filled with dunes, the first hint of the Sahara Desert, which continues to fan out over the continent to the southeast.