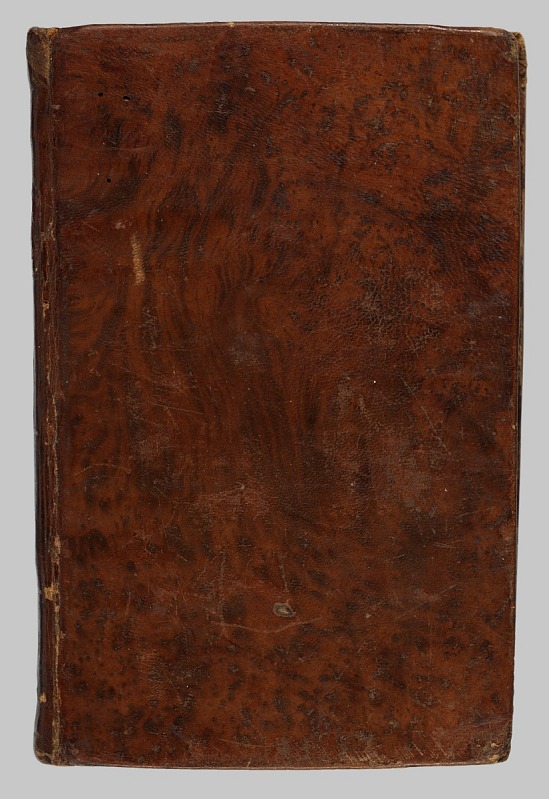 The Life of Mahomet

A hardcover book with a reddish-brown leather cover. There is no text on the front or back cover. There is faded gold text on the spine, along with several horizontal stripes on the spine. The text reads [LIFE OF/MAHOMET]. The book is very old. The cover has many creases and several areas where the leather has worn away. The pages inside the book have many wrinkles and stains, and some of them have small tears. The title age of the book reads [THE/LIFE/OF/MAHOMET/WITH SKETCHES OF THE REIGNS/OF HIS SUCCESSORS/ABUBEKER, OMAR,/OTHMAN, and ALI.]. There Is a decorative design, followed by more text which reads [FROM THE DECLINE & FALL OF THE ROMAN EMPIRE./BY EDWARD GIBBON, Esq.] There is another design underneath, followed by more text. The text reads [PRINTED AT LEOMINSTER, BY SALMON WILDER, FOR JOHN WHITING, OF LANCASTER, -1805.-]. The book's text ends on page 171.
Medium: leather, ink, and paperDimensions: H x W x D (closed): 5 3/4 × 3 13/16 × 13/16 in. (14.6 × 9.7 × 2.1 cm)Object number: 2014.63.62Credit Line: Collection of the Smithsonian National Museum of African American History and CultureWritten by: Edward Gibbon, English, 1737 - 1794Place printed: Leominster, Worcester County, Massachusetts, United States, North and Central America
Data Source: National Museum of African American History and Culture