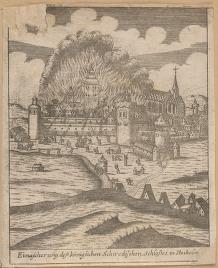 The Fire at the Royal Castle in Stockholm, 1697.

This engraving shows the fire of 1697 that destroyed Tre Kronor, the 16th--17th century royal castle that once housed the ruling monarchs of Sweden. As Sweden rose to become a great power, the dichotomy between its wealth, power, and ties to Europe and the spartan northern wooden structure that housed its rulers became ever more apparent. This was never more so than under Queen Christina (reigned 1632--54), who followed developments on the continent and succeeded in intellectually annexing Sweden to an international learned community. Scholars who made their way north to her residence, among them the French philosopher René Descartes (1596--1650), found the accommodations cold and uninviting. The fire of 1697 obliterated not only the structure and its collections, but a cultural reality and world view. The old wooden castle was replaced by a modern stone and brick building, conceived by the Swedish architect Nicodemus Tessin the Younger (1654--1728). This new structure signaled a new direction for the future. Sweden increasingly directed its attention towards cultural and political dynamics in France, turning its back on the early modern German lands on which it had once modeled itself.