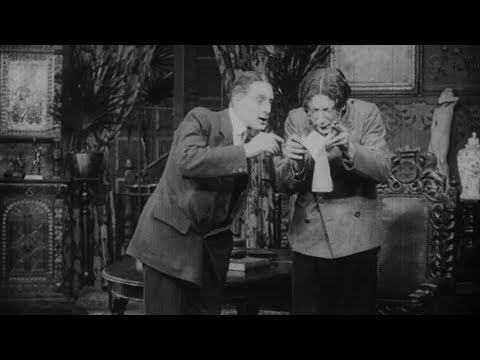 Fa parte degli Orphan Works del British Film Institute
Durata: 14 min.
This daft comedy pits the popular character Pimple (Fred Evans) against his cousin in a fight to secure an inheritance from an insane uncle (played by Fred's brother Joe). A suspicious letter contains some dubious advice on how Pimple should treat his uncle's insanity - including singing to him and playing practical jokes - with predictable but funny results. Fred Evans was the nation's favourite comedian until the rise of Chaplin - Fred's childhood friend. Together with his brother Joe| Fred made some 200 comedies before and during WWI| many of which starred the popular Pimple character| which he played himself. This video is part of the Orphan Works collection. When the rights-holder for a film cannot be found| that film is classified as an Orphan Work. Find out more about Orphan Works: http://ec.europa.eu/internal_market/c.... This is in line with the EU Orphan Works Directive of 2012. The results of our search for the rights holder of this film can be found in the EU Orphan Works Database: https://euipo.europa.eu/ohimportal/en... Subscribe: http://bit.ly/subscribetotheBFI.