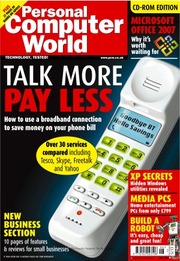 Personal Computer World (usually referred to as PCW) (February 1978 - June 2009) was the first British computer magazine. Although for at least the last decade it contained a high proportion of Windows PC content (reflecting the state of the IT field), the magazine's title was not intended as a specific reference to this. At its inception in 1978 'personal computer' was still a generic term, and did not refer specifically to the Wintel (or 'IBM PC compatible') platform; in fact, such a thing did not exist at the time (the original IBM PC itself would not be launched for another three years). Similarly, the magazine was unrelated to the Amstrad PCW.