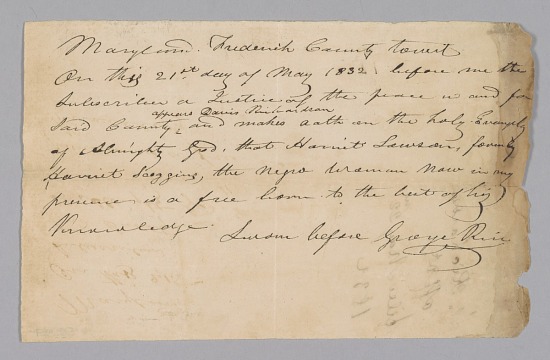 A free woman's pass for a free African American woman, Harriet Lawson, to visit her husband Caleb Lawson, signed in Frederick County, Maryland, on May 21, 1832. Davis Richardson is listed as the witness. The pass is on a single sheet of paper. There is handwriting in ink on both recto and verso, handwriting in pencil on verso only. The proper right side has discoloration and abrasions with loss of paper along the edge but no apparent loss of text. The ink writing from the verso side is visible faintly through to the recto side. Creases remain from the pass having been folded twice, once lengthwise and once widthwise.
Medium: ink on writing paperDimensions: H x W: 5 × 7 15/16 in. (12.7 × 20.2 cm)Object number: 2014.63.7Credit Line: Collection of the Smithsonian National Museum of African American History and CultureSubject of: Harriet Lawson, American, born 1803 ; Caleb LawsonCaption: To Visit Your Husband: Harriet Lawson’s Pass, 1832 ; Harriet Lawson carried this pass to visit her husband, Caleb, at work in a nearby town. As free blacks, the Lawsons could legally marry, but Maryland placed limits on their liberty. If they traveled without a pass, they could be fined $20 or sold into slavery. ; The Back of Lawson’s Pass ; If stopped, Lawson would face the humiliation of being physically inspected. This pass described her as: “Black, 29 yrs of age five feet high has a mole on the right side of her right eye no other perceptible mark.” ; Source: Nancy Bercaw, Curator, Slavery and Freedom
Place: Frederick County, Maryland, United States, North and Central America
Data Source: National Museum of African American History and Culture