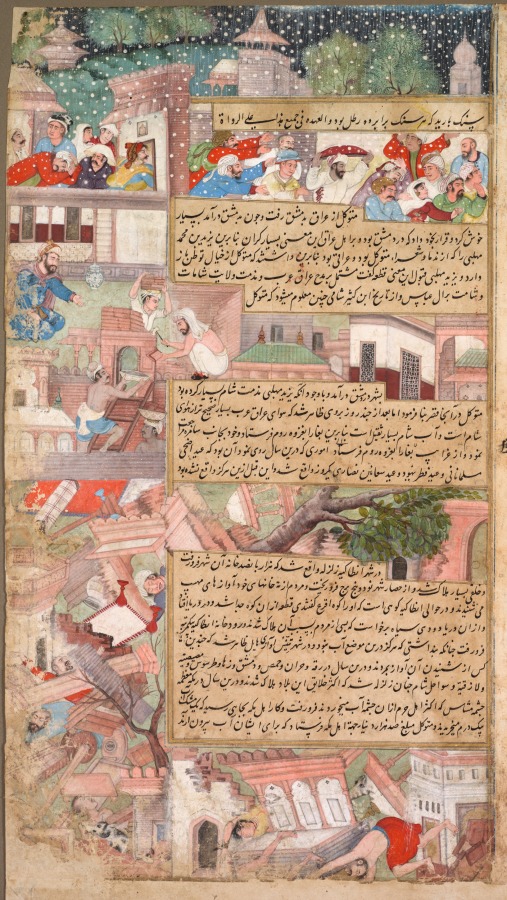 Page of disasters, from the Tarikh-i Alfi (History of the Thousand [Years])

Oggetto: Painting
The 1,000th anniversary of Islam, according to the Hijri calendar followed by the Mughals and all Muslims, occurred during Akbar’s reign in 1592. He commemorated this milestone in many ways, including the commissioning of a new history of the Islamic world since the death of the Prophet Muhammad in 632. The episode discussed on this page took place during the 800s, when hailstorms beset Egypt and an earthquake hit Syria. The ruling caliph at the time was strongly prejudiced against Muslims who belonged to the Shi‘ite branch of Islam. Akbar seemed to be asking his artists to emphasize the natural disasters that took place, suggesting that they occurred as a result of the ruler’s intolerance.
Fonte: Page of disasters, from the Tarikh-i Alfi (History of the Thousand [Years]), c. 1595. India, Mughal school, 16th century. Ink and color on paper; overall: 41 x 22.6 cm (16 1/8 x 8 7/8 in.). The Cleveland Museum of Art, Dudley P. Allen Fund 1932.36.a