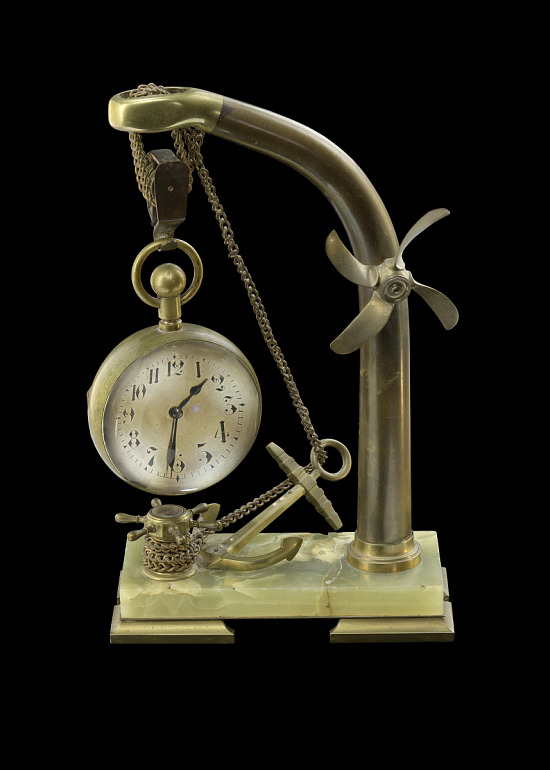 A table clock with nautical design gifted from President Theodore Roosevelt to William L. Houston. The clock is comprised of two separate pieces, the clock itself (.4a) and the base (.4b). The bottom of the clock is made of marble resting on four metal pedestals at each corner. The greenish marble is cracked throughout but still intact. The largest feature of the clock is a brass arm on the right side that curves to the left. On the front of the arm is a propeller. The top of the arm has a piece that connects the chain to the block and tackle pulley system that holds up the clock. The clock is spherical and hangs from a post connected to a circle. The circle rests on the hook of the pulley system. The back of the clock is metal and opens on a hinge to show the inner mechanics. The front of the clock is glass with a numbered face. The metal chain connected to the pulley continues through the top circle of an anchor mounted to the marble base and then wraps around a ship's wheel secured to the base just below the hanging clock sphere. Inside the top of the wheel is a compass.
Medium: glass, metal and marbleDimensions: H x W x D (.4a Clock): 7 × 4 3/8 × 4 3/8 in. (17.8 × 11.2 × 11.2 cm) ; H x W x D (.4b Stand): 10 × 4 1/2 × 15 1/2 in. (25.4 × 11.4 × 39.4 cm)Object number: 2018.59.4abCredit Line: Collection of the Smithsonian National Museum of African American History and Culture, Gift of Charles Hamilton Houston, Jr. and Dr. Rosemary JagusOwned by: Charles Hamilton Houston, American, 1895 - 1951Caption: William LePre Houston (1870-1953) was a prominent Washington, DC attorney who was active in the Republican Party and worked for African American labor organizations, including the Railway Men's International Benevolent Industrial Association. According to son and law partner Charles Hamilton Houston, this nautical clock was a gift from President Theodore Roosevelt for his father's role as an unofficial African American advisor.The clock was a significant family heirloom that resided on the mantelpiece of the family's home on Washington's northwest side.Received by: William Lepre Houston, American, 1870 - 1953Commissioned by: President Theodore Roosevelt, American, 1858 - 1919
Place: United States, North and Central America
Data Source: National Museum of African American History and Culture