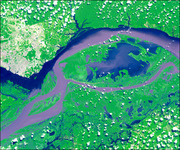 Manaus, Brazil: Image Of The Day

The above image was acquired by the Advanced Spaceborne Thermal Emissions and Reflection Radiometer (ASTER) aboard NASA?s terra.nasa.gov Terra satellite and shows the junctions of the Amazon and Rio Negro rivers in Manus, Brazil. The Rio Negro flows 2300 kilometers (1400 miles) from Colombia to Brazil and appears dark blue in the image. The river gets its color from the high levels of tannin in the water. The waters of the Amazon River contain more sediment and appear purple and brown in the image. The city of Manus can be seen in the upper left-hand corner of the image. Manus is the capital of the state of Amazonas and has a population of one million. The ASTER image covers an area of 60 by 45 kilometers (37 by 28 miles) and was acquired on July 16, 2000. A week later, the Multi-angle Imaging Spectroradiometer, also aboard the Terra satellite, acquired an /Newsroom/NewImages/images.php3?img_id=4570 overview of the same area.