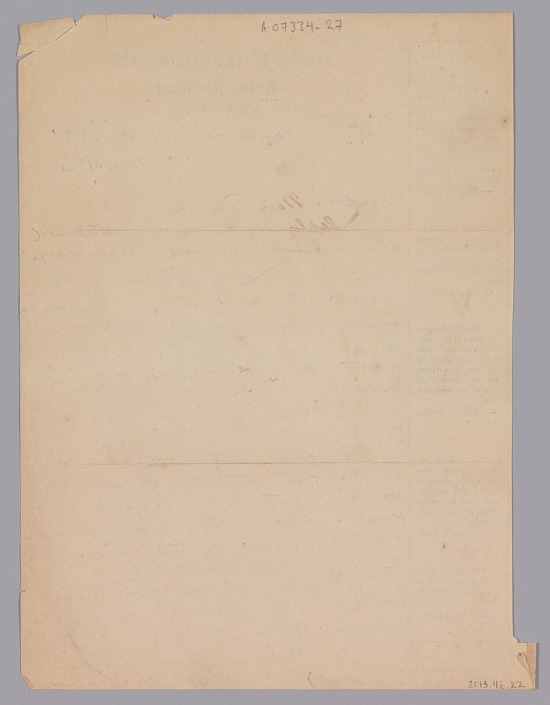 Letter to Mrs. Terrell from Joseph H. Douglass, grandson of Frederick Douglass, dated May 31, 1911. Single page written on Douglass' personal stationary. Black ink on tan paper. Letter head at the top reads [JOSEPH H. DOUGLASS / Solo Violinist / ENGAGEMENTS ACCEPTED / FOR RECITALS / CONCERTS AND CHURCH / SERVICES / NOW TOURING AMERICA]. Along the left side of the page is a text box containing five quotes from newspapers titled [PRESS COMMENTS]. The handwritten letter reads [1644 Fla. ave N. W. / Wash. D.C. May 31st 1911 / My dear Mrs Terrell: / Replying to your esteemed / favor just received, will say / that it is my pleasure to / accept the invitation to the present / and render a violin selection / on the occasion of the one hun- / dredth anniversary of Harriet / Beecher Stowe. / I thank you for the oppor- / tunity and honor which enables / me to add my little mite / in the celebration of that noble / woman's birth as well as to appear / before such a body of honored women. / I am proud of the fact that / among those mentioned in your / letter, none will be more represen- / tative or distinguished among the / speakers of the meeting than your / honored self. / Yours most sincerely / Joseph H. Douglass / (P.S. / I have carefully / noted the date June 14")]
Medium: ink on paper (fiber product)Dimensions: H x W: 11 × 8 3/8 in. (27.9 × 21.3 cm)Object number: 2013.46.22Credit Line: Collection of the Smithsonian National Museum of African American History and CultureSubject of: Harriet Beecher Stowe, American, 1811 - 1896 ; National Association of Colored Women's Clubs, American, founded 1896Written by: Joseph Henry Douglass, American, 1871 - 1935Received by: Mary Church Terrell, American, 1863 - 1954
Place: Washington, District of Columbia, United States, North and Central America
Data Source: National Museum of African American History and Culture