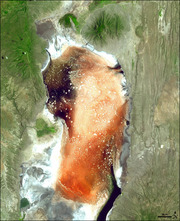 Lake Natron, in Africa's Great Rift Valley, practically sends a warning with its color. This bright red lake is the world's most caustic body of water, but not to everything. An endemic species of fish, the alkaline tilapia, lives along the edges of the hotspring inlets, and the lake actually derives its color from salt-loving microorganisms that thrive in its alkaline waters. Spirulina, a blue-green algae with red pigments, passes its pigments along to the www.pbs.org/wnet/nature/firebird/html/facts.html'' target=''_blank Lesser Flamingoes that feed on the algae and raise their young here. The Advanced Spaceborne Thermal Emission and Reflection Radiometer (ASTER) flying on the Terra satellite captured this image on March 8, 2003. This image simulates natural color, showing where the salt-loving microorganisms have colored the lake's salt crust red or pink. The salt crust changes over time, giving the lake a slightly different appearance each time it is photographed by astronauts or imaged by satellites. Volcanic ash from the Great Rift Valley has collected in local lake basins, creating a network of soda lakes hostile to most organisms. This forbidding environment enables Lake Natron to serve millions of flamingoes as the ideal nursery; would-be predators avoid the saline lake and leave young birds in peace. Flamingoes must exercise caution, however, because the lake can turn deadly even to them. Depending on rainfall, its alkalinity can approach that of straight ammonia, and when the lake is flooded with water that has heated underground, its temperature can reach a scalding 60 degrees Celsius (140 degrees Fahrenheit). The www.worldwildlife.org/wildworld/profiles/terrestrial/at/at0901_full.html'' target=''blank uniqueness of Lake Natron prompted Tanzania to add the lake to the Ramsar List of Wetlands of International Importance on July 4, 2001.