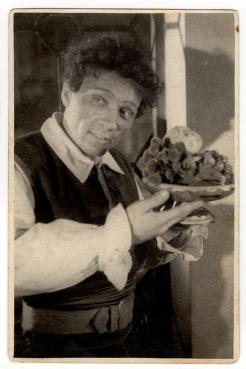 This item is from a collection of materials related to the Salekhard-Igarka Railway, an unfinished Soviet railroad sometimes called the ""Dead Road."" This railroad was intended to unite European Russia with the northern regions of Siberia and to facilitate the export of minerals from the industrial city of Noril'sk. Construction began in 1949 but was abandoned in 1953 after Stalin's death. Stalin had ordered the construction of the railroad without heeding the advice of specialists, who knew that a railroad built on permafrost would be difficult to maintain. Stalin considered the railroad strategically necessary to facilitate the defense of Russia's northern coast; however, actual demand for the railway was low. Construction was divided into two projects, number 501 and number 503, and was carried out by prisoners of the infamous gulag system. According to eyewitness accounts, conditions in the camps of these projects and in Yermakovo, the central settlement of construction project 503, were better than in most parts of the gulag system. This collection consists of photographs, documents, maps, letters, and memoirs housed in the Igarka Museum of Permafrost. Photographs depict daily life in Yermakovo, a settlement near Igarka, abandoned buildings and railroad equipment, and musicians and actors of the projects' cultural and educational divisions. Many of the photographs were taken by Walter Ruge (1915-2011) and depict his wife Irina Andreevna Alferova. Ruge completed a ten-year sentence as a political prisoner in 1951 before he was released to live as an exile in Yermakovo, where he met Alferova, a fellow exile. The collection's documents and maps provide information about the planning and construction of the railroad and the administration of the camps, while the memoirs and letters describe the experiences of prisoners, exiles, and civilian residents of Yermakovo and the camps. The collection was digitized in the early 2000s for the Meeting of Frontiers digital library project."