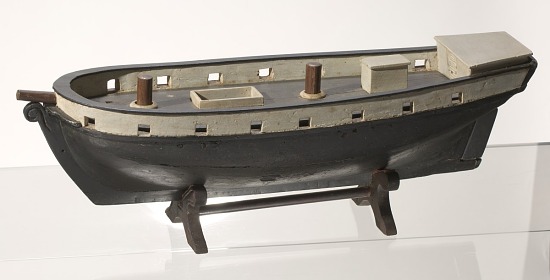 Folk art model of a slave ship on stand

This model of a slave ship consists of a wooden hull (a), a removable deck (b), and a wooden stand (c). | The wooden hull (a) is made of a soft wood painted black on the outside, with a cream border around the top where sixteen square holes are carved, eight on each side. The interior of the hull is painted cream. At the interior of the stern is an enclosed white structure. A functioning door is attached at the center front of the enclosed structure, with carved slats and a small metal pin as a door knob. Two stained wooden circular pieces reach up out of the hull from the lower deck and extend above the removable upper deck (b) when it is in place. The rudder of the ship is functional. The exterior front of the bow has a decorative curled element with a carved outline detail. Above this is a stained wooden circular piece that protudes from the bow as a bowsprit. The lower deck has two rectangular cut-outs trimmed in cream raised edges. The one nearest the bow is larger than the one nearest the stern. They correspond to the rectangular openings on the removable deck (b). These cutouts are open to the hold. Lined along the lower deck are carved ivory figures painted or stained black. Each figure is an individually carved piece adhered to the ship, with individualized faces, bodies, and heights. Additional figures are visible in the hold from the rectangular openings. The figures are adult males and females, and some short figures may be meant to represent children or adolescents. All of the figures are wearing cloths around their genitals, but are bare-chested. | The removable deck (b) is made of a soft wood painted black on the top and left untreated on the bottom. The top of the deck has four cut-outs that are trimmed in cream painted wood. The first and third cut-outs from the bow are circular, the second is a rectangle with a raised cream edge, and the fourth is a rectangle with a box-like cream structure that is open on the back side but with a covered roof. In addition to the four larger cutouts there are two small square cut-outs in front of and flanking the circular cutout nearest the bow that are not trimmed in white detailing. There are three small holes, one at each side and one in front of the circular cut-out nearest the stern also not trimmed in white. There are two sets of two small holes at the edges of the deck flanking the cream roofed structure nearest the stern. | The stand (c) is made from wood and formed of two quatrefoil endcaps and a center dowel. There is decorative outline carving on the endcaps. The dowel is attached at a slight angle to accomodate the slope of the hull (a). The bottom of the hull sits parrallel to the dowel, resting on red wool pads that are adhered along the top edges of the endcaps. The wood is stained with a dark finish, of a different color than the black painted hull. The stand was clearly made for this ship model, but may not be original to it considering the different finish color.
Medium: wood and ivoryDimensions: H x W x D (abc): 6 1/8 × 21 × 6 in. (15.6 × 53.3 × 15.2 cm) ; H x W x D (a): 5 3/8 × 21 × 6 in. (13.7 × 53.3 × 15.2 cm) ; H x W x D (b): 1 1/4 × 15 1/2 × 5 1/16 in. (3.2 × 39.4 × 12.9 cm) ; H x W x D (c): 2 5/8 × 8 3/8 × 4 1/2 in. (6.7 × 21.3 × 11.4 cm)Object number: 2013.196.1abcCredit Line: Collection of the Smithsonian National Museum of African American History and CultureCaption: This model was made by an unknown artist in the first half of the 20th century. The ship and the figures are not to scale. Nor are the figures arranged in an historically accurate way. Yet the object speaks an emotional truth. Most of the artist's work has been poured into the carving of the figures on board the ship. They are each hand-carved and represent different people in different states - some with ribs showing, others with rounded bellies, tall, short, male and female. The emotion invested in the carvings is palpable. ; Scholars estimate that of every group of 100 people seized in Africa, only 64 would survive the march from the interior to the coast; only 57 would board ship; and just 48 would live to be placed in slavery in the Americas. ; Source: Nancy Bercaw, Curator, Slavery and Freedom
Data Source: National Museum of African American History and Culture