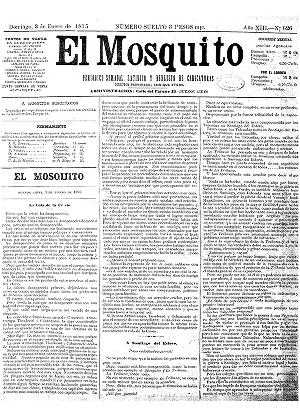 El Mosquito, which described itself as a ""weekly independent, satirical, burlesque periodical with caricatures,"" appeared for the first time on May 24, 1863. In the more than 1,500 issues published between then and the last issue in 1893, the newspaper satirized the behavior of local politicians. The publication provides a unique vantage point on the formation of the modern nation-state in Argentina. Published on Sundays, the newspaper consisted of four pages, with the two middle pages exclusively dedicated to lithographs that caricaturized current events and important figures of the day. The front and back pages were set aside for columns with satirical text, particularly ""Los picotones,"" which offered harsh and informed commentary on contemporary events. Starting in 1880, the front page displayed the ""Galeri?a contempora?nea,"" lithographic portraits of eminent leaders in Argentine society or eye-catching caricatures that sought to shock potential readers. Some historians recognize in the pages of El Mosquito a certain critical objectivity, adopted, they argue, with an eye to commercial survival. Others emphasize the rebellious character of the published lithographs and the links between them and various interests in Argentina, which place the publication more in the context of domestic political conflict. Between 1875 and 1890, the Frenchman Henri Stein was the owner-manager of El Mosquito, in addition to being its main artist. Stein defined the political-ideological outlook of the newspaper during those years, giving it a marked liberal and republican tendency."