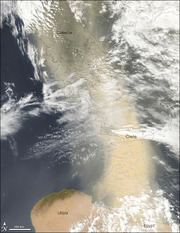 Dust Over Greece: Image Of The Day

Powerful winds pulled a thick band of desert dust from Egypt and Libya over the Mediterranean Sea on April 17, 2005. The dust is so thick that Crete is completely obscured from view, and the ground of Greece is barely visible. African dust frequently blows over the Mediterranean in the spring, carrying tons of dust into Greece. This particular storm shrouded the country in a yellow haze that cancelled or delayed flights and halted sea transport, according to local news reports. The winds that produced this dust storm blew at an average of 75-89 kilometers per hour (47-55 mph) near the sea's surface, and stronger winds prevailed higher in the atmosphere. The Moderate Resolution Imaging Spectroradiometer ( modis.gsfc.nasa.gov MODIS ) on NASA's aqua.nasa.gov/ Aqua satellite captured this photo-like image of the storm.