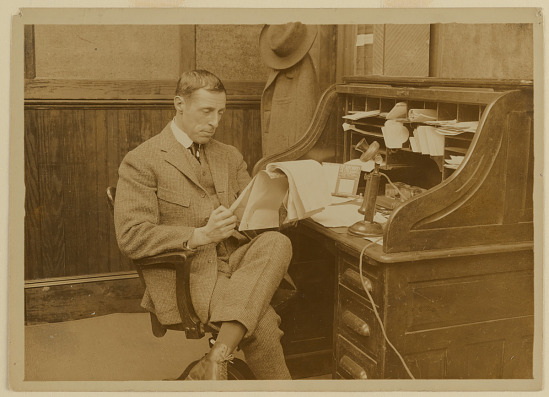 Medium: Gelatin silver printDimensions: Image: 11.8 x 17 cm (4 5/8 x 6 11/16") ; Sheet: 12.7 × 17.8 cm (5 × 7") ; Mat: 45.7 × 35.6 cm (18 × 14")Object number: NPG.80.97Credit Line: National Portrait Gallery, Smithsonian InstitutionSitter: David Lewelyn Wark Griffith, 22 Jan 1875 - 23 Jul 1948Exhibition Label: D. W. Griffith, the son of a Kentucky slave owner, became one of the silent-screen era's most influential directors. He is best remembered for his epic Birth of a Nation, which depicted the South after the Civil War as terrorized by carpetbaggers and freed slaves, with the Ku Klux Klan as the savior of southern honor. The film's racist themes mirrored the appalling reality of race relations in 1915. But its technical virtuosity and epic quality, combined with an intensely personal narrative of individuals caught up in historic events, made it a remarkable cinematic achievement. While not an innovator, Griffith enhanced many of the era's new film techniques. By integrating those techniques within powerful spectacle and narrative, he brought the cinema to new heights, elevating it to an art form and making him "the father of the motion picture."
Data Source: National Portrait Gallery